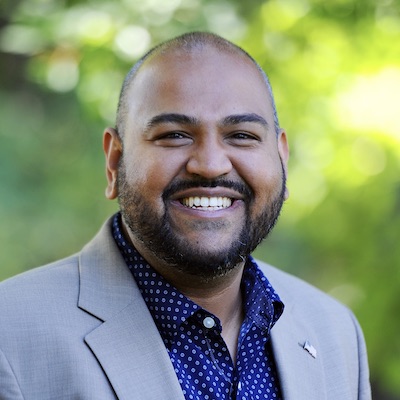 Aizaz Gill serves as the Pennsylvania Policy Director, where he mobilizes the business community to support fair, secure, and accessible elections for all Pennsylvanians. His focus is to build coalitions with business leaders from all corners of Pennsylvania, to expand a multifaceted education and advocacy campaign centered around developing civic engagement, increasing political stability, and reducing polarization.

Aizaz has spent the last six years serving Philadelphia voters as a community outreach coordinator for City Commissioners Al Schmidt and Seth Bluestein. He was the first multilingual Asian-American hire for the Philadelphia City Commissioners Office where he spearheaded outreach efforts to educate voters on the use of a new voting system in Philadelphia, battled misinformation as a frontline election worker, and strategically engaged community, local, state, and federal institutions to collaborate on voter outreach and education. Prior to working for the city commissioners, Aizaz spent years working on and managing political campaigns on the local and state level.

Aizaz’s parents immigrated to the United States when he was nine nine years old, and he has been a proud Pennsylvanian ever since. Aizaz earned a Bachelor of Arts in Political Science from Chestnut Hill College. Aizaz has deep ties to his community; he was elected to serve as the president of Burholme Townwatch and Civic Association and has served in that role for more than three years.